Dominic Parckar, Dawleys “We are particularly pleased to be associated with a successful club like Ross Juniors FC with its fine tradition of providing opportunities for and developing young talent of both sexes in our national game.”

Great pic of Dom presenting Danie Ward and Hannah Jenkins, a player from the U14s with their hoodies….

For the full story see The Ross Gazette 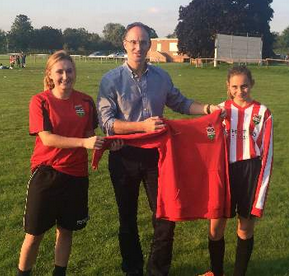